Jack is a young, poor boy living with his widowed mother and a dairy cow on a farm cottage. The cow’s milk was their only source of income. When the cow stops giving milk, Jack’s mother tells him to take her to the market to be sold. On the way, Jack meets a bean dealer who offers magic beans in exchange for the cow, and Jack makes the trade. When he arrives home without any money, his mother becomes angry, throws the beans on the ground, and sends Jack to bed without dinner.

During the night, the magic beans cause a gigantic beanstalk to grow outside Jack’s window. The next morning, Jack climbs the beanstalk to a land high in the sky. He finds an enormous castle and sneaks in. Soon after, the castle’s owner, a giant, returns home. He smells that Jack is nearby, and speaks a rhyme:

Fee-fi-fo-fum!
I smell the blood of an Englishman:
Be he alive, or be he dead,
I’ll grind his bones to make my bread.

In the versions in which the giant’s wife (the giantess) features, she persuades him that he is mistaken and helps Jack hide because the woman knows that he is poor. When the giant falls asleep, Jack steals a bag of gold coins and makes his escape down the beanstalk.

Jack climbs the beanstalk twice more. He learns of other treasures and steals them when the giant sleeps: first a goose that lays golden eggs, then a magic harp that plays by itself. The giant wakes when Jack leaves the house with the harp (who calls out to the giant) and chases Jack down the beanstalk. Jack calls to his mother for an axe and before the giant reaches the ground, cuts down the beanstalk, causing the giant to fall to his death.

Jack and his mother live happily ever after with the riches that Jack acquired.

That’s really something, isn’t it?

What brought that to mind is that the Fortex beans are much taller than everything in our garden, and that’s been the case since about two weeks after we planted them:

If you’re going to author a fairy tale about garden plants that get really tall really fast, beans are the obvious choice. The story practically writes itself, except for the castle, the giant, the singing harp, and the golden goose. And the poor cow that drives the plot.

The trellis is a little under six feet high. One thing we learned last year is we don’t want to use a trellis that is taller than I can reach without assistance. Having to pull out a ladder every few days to get the beans way up high is a drag.

The Tromboncino use an eight foot trellis. They’ll grow up and over the top in a few weeks:

Behind the Tromboncino are two boxes of  indeterminate tomatoes (two Black Krim in the near box, and Old German and a Sun Gold in the next box.) The determinate tomatoes are on the “front” edge of the patio (two Roma on the corner, a Taxi and an Oregon Cherry straight ahead. To the left along the edge are two Oregon Spring.)

The tomatillos are doing well. The bees love these: 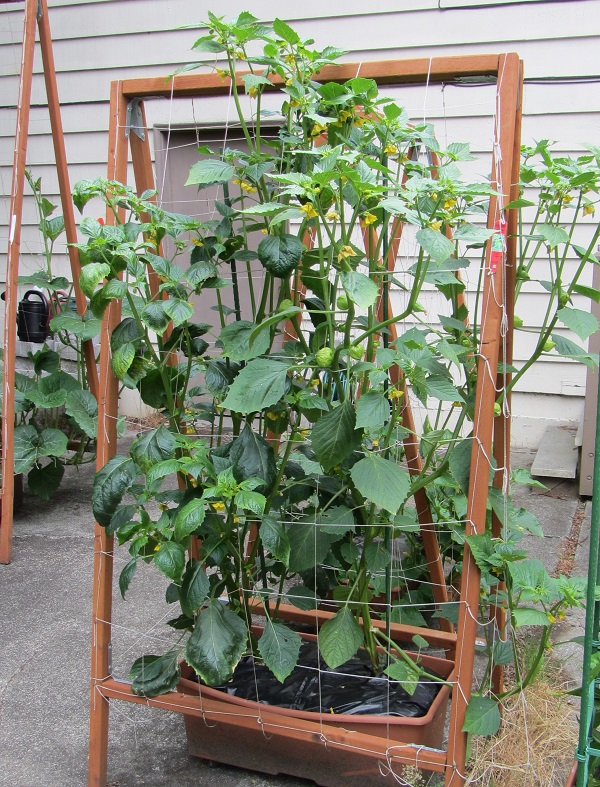 The cucumbers are getting their first fruits: 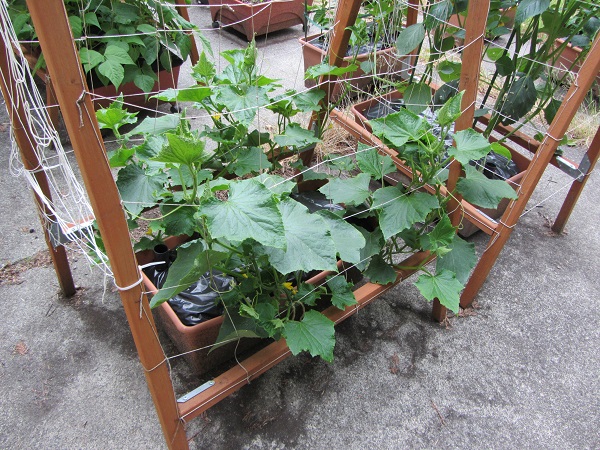 The rainbow chard finally decided to “go”. I think we planted it two or three years ago and not much happened until recently. The lurid stalk is eye-catching:

An overview facing the house. Tomatoes on the left. Carmen peppers on the right: 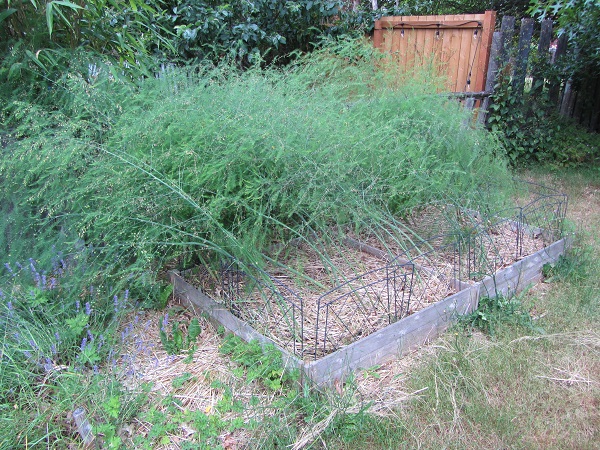 And the Super Sugar Snow peas hanging on the front-yard salad table: