GNOIF #16 Recap — New GNOIF On The Block (Games that have only been played a few times at GNOIF.)

Games That Got Played —  Castle Panic, Dead Fellas, Fluxx, Forbidden Desert, Get Dr. Lucky, Run For Your Life Candyman, Star Realms, Ultimate Werewolf, We Didn’t Playtest This At All.

GNOIF turned sweet sixteen, and we celebrated by offering games that hadn’t been seen much in past events. Not too surprisingly, everyone gravitated to stuff that at least a few people knew how to play… and almost all the games played could be categorized as “light”. It seems starting from scratch by reading a big rulebook and then teaching is too slow when there are games that need little introduction. (I started to type “introducation”. That word doesn’t exist, but I think it should. It’s perfect for what I’m trying to describe.)

Which sort of makes it funny that the big hit of the evening was new to everyone. Ultimate Werewolf. One person went into the other room, read the (tiny) rulebook, then taught it to the group of ten players. It has some similarities to Resistance or Mafia, which helped the learning curve.

The concept is that some of the players are Werewolves, some are Villagers, and some are “special” roles such as “Seer”, the “Hunter”, or “The Village Idiot”. Each player’s role is a secret. The Werewolves try to eat the Villagers, and the Villagers try not to get eaten… there’s more to it than that, but that’s the gist of it. Suitable for 5 to 30 players, and best at 10-15 players, it made a good substitute for some of the other “late in the evening” games we’ve been playing, such as Bang! or The Worst Card Game Ever. It was loud, boisterous, and not too heavy on the thinking.

Another early crowd and we got into a lot of games again. At this point most of the crowd has played Bang!, Fluxx, and Dominion — those games can suck up quite a few players and still be breezy and relatively fast. The other games all had significant first-time learning curves and wound up being somewhat more time intensive as a result. Overall the evening saw a good balance of Light and Serious games.

I’ve been making a sheet-tray sized sandwich for every GNOIF over at least the last two or three years. The bread components of those sandwiches have all been riffs on focaccia.

The most recent ratios:

The “Flour” for the pictured bread is 50% Gold Medal unbleached AP flour and 50% King Arthur bread flour. I added a small amount of honey to try to improve the browning, which seemed to work ok. It’s largely the same process as “Potluck Focaccia” — I’ve settled into a preferred routine for focaccia it seems:

1.  Combine all ingredients in a mixer and combine on low speed for 10 minutes. Lightly oil a parchment lined sheet tray.
2.  Pour the dough into the sheet tray, gently coaxing the dough towards the edges of the pan. Cover and let rest 2 hours.
3.  Preheat oven to 425F.
4.  When the oven is hot, drizzle a small amount of oil on the dough. Gently coax the oil over the surface.
5.  Bake for 15 minutes, turn the tray 180 degrees and bake for another 10 minutes.

This one is roast beef and ham with swiss. The flavored mayo (which one guest mistook for mustard) included olive oil, salt, “Montreal Steak Seasoning”, and a healthy dose of horseradish. (The pungency of the horseradish is likely what crossed him up.)

There are now 14 posts that reference focaccia on CheapSeatEats. It still trails pizza, which gets at least a mention in 55 posts (though I’m sure there’s some overlap)… We clearly love us some flattish breads.

We got a bit of a late start due to the Seahawks game, and we’d started “celebrating” well before GNOIF commenced. The games played were mostly the simpler, faster, social-oriented games that most everyone had played at least once or twice. Coincidence? I doubt it.

One table alternated games of Poo and Forbidden Island. Table two had a couple of big games of Bang followed by a few games of Guillotine. We had vaguely more players than seats at the tables, so people swapped in and out — it left plenty of time to circulate and hit the buffet. (Like I said, it was that kind of evening.)

We wrapped it up by putting the 9v battery into the controller of Stop Thief. We didn’t play, but it gave everyone a chance to see how the game worked and attempt some arrests. Definitely some 80’s flashbacks, and by 80’s I mean 1980. There are some pictures of the controller and box now floating around on Facebook.

Good times. Thanks to everyone who played.

The big hits were Last Night On Earth and Dead Fellas. We wound up playing two games of the Last Night On Earth Escape In The Truck Scenario — the Heroes won both games despite some aggressive card cycling from the zombies. In the first game the heroes won easily by drawing two of Just What I Needed, which allowed them to pull the win conditions (Gas and the Keys) from the deck. In the second game we removed two of the four copies of Just What I Needed from play. That seemed to better balance the scenario:  The heroes won that game with only four turns to spare.

Looking around the internet, this might be a good alternate way to play the scenario (Boardgamegeek link):

Link to my thread on thezombiegame.com where the scenario card can be downloaded FREE. This was very well received there, please enjoy!

1) Place the truck in the center of Town. Remove all of the Gasoline cards from the Hero Deck. The Gasoline is obtained from a “Well Stocked” Gas Station that cannot be taken over. Place counters 1-6 facedown in random buildings. Roll a d6 to determine the counter that is the Truck Keys.

2) Heroes can replace their move/search roll with a d6 to look for the Truck Keys. On the roll of 1-3 Take a Hero Card. On the roll of 4+ reveal the counter.
-If Hero is killed carrying Truck Keys then their Zombie Hero must be killed to recover them.

3) To fill up the truck with gas a Hero must give up their turn in the truck and discard the Gasoline.

5) Escape phase – The following rule changes are now in effect.
-The Driver always goes first in subsequent human turns. All the driver can do is attempt to start the truck. They cannot fight, shoot range weapons, or use special abilities. If the Driver is ever left alone with a zombie then they are immediately killed and the game is over.
-the sun tracker stops and the 4 Hero death win condition no longer applies.
-Heroes cannot leave the truck but can get on the truck.
-Heroes killed DO become Zombie Heros and Heroes DO NOT respawn.
-Fights on the truck only happen on Zombie turn.
-When Heroes win a fight they knock the zombies 1 space out of the truck (Heroes Choice).

6) Once truck is started all zombies or Zombie Heroes in the truck must be either killed or knocked off the truck by beating them in a fight. No more zombies can get onto the truck after it has started and the Zombie player can not draw new cards.
-Driver now rolls 2 dice at the start of each subsequent hero turn that the humans fail to clear the truck. If the Driver rolls doubles then the truck crashes and the escape failed.

We played four games of Dead Fellas as well. It’s quick and easily accessible, and it’s possible to have a dramatic comeback at the end of the game.

For fun, here’s a list of the games offered over the first ten GNOIFs:

Games That Got Played:  Bang!, Betrayal At House On The Hill, Cards Against Humanity, Pirate Fluxx, Pirate’s Cove, Run For Your Life Candyman!, Rocketville

Playing fast and loose with the “Outlaw” theme. It was obvious that there weren’t enough cowboy and gangster themed games in the closet, so the theme expanded to include undead, politics, and feces-throwing monkeys. The turnout was excellent; it looks like it’s time to add another table.

Cards Against Humanity was a huge hit again. We played Pirate’s Cove for the first time and had a lot of fun with it. (Though I got completely screwed by the dice. My awesome pirate ship was completely crippled by a couple of bad rolls of the dice. I’m not bitter or anything.)

Bang! was a big hit too. It’s a card game where every player plays a random role in a stereotypical spaghetti western. From BoardGameGeek:

There are 22 different types of cards in the draw deck. Most common are the BANG! cards, which let you shoot at another player, assuming the target is within “range” of your current gun. The target player can play a “MISSED!” card to dodge the shot. Other cards can provide temporary boosts while in play (for example, different guns to improve your firing range) and special one-time effects to help you or hinder your opponents (such as Beer to restore health, or Barrels to hide behind during a shootout). A horse is useful for keeping your distance from unruly neighbors, while the Winchester can hit a target at range 5. The Gatling is a deadly exception where range doesn’t matter – it can only be used once, but targets all other players at the table!

Every “role” is secret except for the Sheriff’s. The Sheriff and Deputies try to shoot the Renegade and the Outlaws. The Outlaws try to take out the Sheriff. The Renegade basically tries to shoot everybody — if the Sheriff dies while any Outlaws are still alive then the Outlaws win. The issue, of course, is that nobody can really be sure who they’re supposed to be targeting. Another catch is that initially you only have enough range with your Colt .45 to shoot the person sitting next to you, but as you get better weapons you can shoot further around the table. It’s a fun, noisy game.

I also heard about some epic fights in Run For Your Life, Candyman!, though I was at the other table getting my ship blown to smithereens.

Thanks to everyone for playing!

Rocketville was the big surprise hit of the evening — we hadn’t played it before a quick cram session earlier in the day, and the boardgamegeek reviews are Not Good. We had a lot of fun with it though. In brief, it’s a fairly simple card based bid/auction game where you’re trying to campaign to become the mayor of Rocketville. The premise really doesn’t have much to do with anything though…  I think these two reviews line up with my take on it pretty well. The reviews are titled “Blame Avalon Hill (defending Rocketville)”, and, “Not Nearly As Bad As They Say”. Rocketville is recommended for 3-5 players. As one of the reviewers states: It’s probably a better game with three players rather than five, which would decrease the impact of luck on the outcome. It’s also a game that you don’t want to pay full price for — $10-$15 is about right; there’s not enough in the box to justify thirty-five bucks. None of that sounds too encouraging, but I’ll say it again, we *did* have a lot of fun with it! 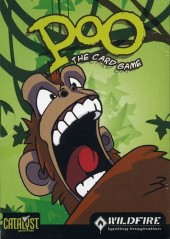 The other surprise hit was a game that was purchased fairly recently —  Poo:  The Card Game. The premise is that you play as a monkey, and you throw poo at the other monkeys until you’re the only reasonably clean monkey left. There are Poo cards and Clean Cards. And cards like “Buddy’s Face”, which allows you to to interpose your buddy between you and the primate flinging poo at you. It’s a fun game with cute and silly graphics and tiny card text.