Last night was cool and clear, so it’s time to shoehorn in a quick “Winter Garden” update before the cold really sets in:

The salad table, which sees sun until about 2pm: 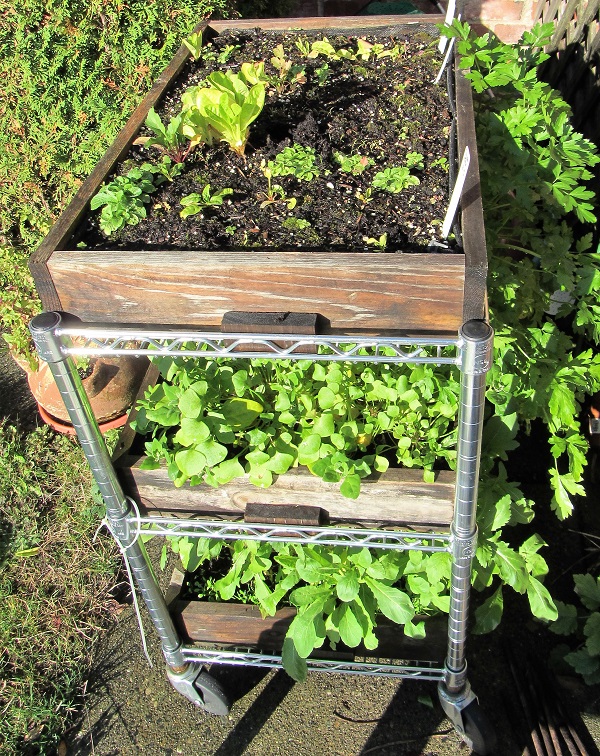 [The top tier is mostly romaine (Winter Density(?)), arugula, cilantro, Mache, and spinach. Middle tier is Miner’s Lettuce and New Zealand Spinach in the front with parsley in the back and poking out the sides. The bottom tier is mostly arugula with a few interspersed cilantro.]

I’ve found the biggest challenge with this salad table arrangement is that the top tier dries out in the August sun, which makes it hard to direct seed and have the little things survive. Going forward, I’m guessing we’ll want to start in July/August with seedlings in pots, placing those in the partially shaded and cooler back yard. Then in early September move some of those plants to the salad table and spread the rest around the summer EarthBoxes as they’re emptied of tomatoes and such.

The previous paragraph was a mouthful, though it’s way better than the pile of sand I started with.

The backyard EarthBoxes have a collection of garlic, shallots, bunch onions, radishes, chard, mache, and carrots. All the greens will need to be harvested in March or April before they bolt. I’ve learned that one. Everything else will need to make room in May for the summer vegetables.

This whiskey barrel was available in mid-late summer after the bugs decimated the nasturtiums. We planted a mix of Mache, spinach, and scallions: 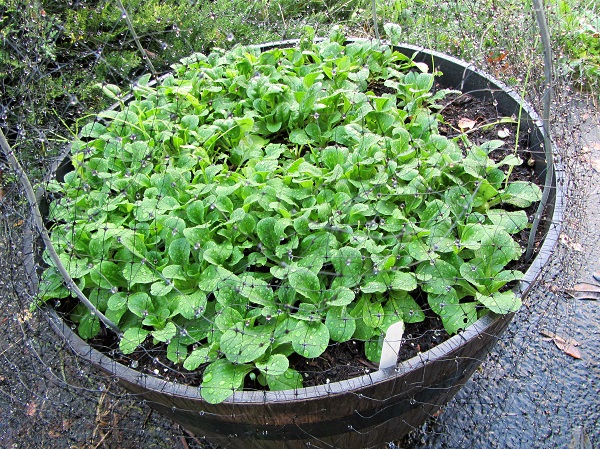 The neat thing about this barrel is that it doesn’t get much direct hot summer sun, but as the sun moves lower on the horizon it gets more sunlight. It’s perfect for stuff that might bolt in August. We’ve been harvesting salads for the last couple of months — it’s been a continuous supply of micro-greens.

That’s it for this update, and now that I look at the weather report it calls for mild temperatures and rain in the coming days..