A brioche for the Pet Store Guy: 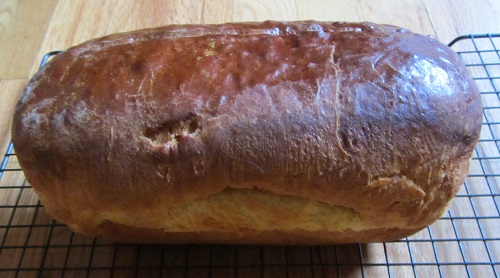 What’s interesting is that one side expanded more than the other side. Again:

The slash was down the middle when I made it — that’s how far the “center” shifted as the bread expanded.

So why did one side rise more than the other?

My first thought would be that the pan needs a lot of butter — any “dry” spots catch on the sides and imbalance the loaf. But it’s happened two tries in a row…

Alternately, I may be misinterpreting the directions. I’m folding such that the seams run lengthwise inside the loaf. It may be that if I fold so that the seams are crosswise… I’d bet that the same “problem” would persist, only one end would rise more than the other instead…

Of course it could be as simple as “stuff happens”. I thought the first bread was slashed well, but it looks like the slash could have been deeper on the 2nd bread.

I don’t know. It could be different combinations of factors in each loaf.

I’m going to have to try more recipes from the Beranbaum book. My feeling is that this particular recipe could be worded better. I think I did everything right, but I spent a whole bunch more time than usual reading the recipe. I think bits and pieces of the recipe are spread around somewhat, and the ingredients are lumped together in a non-intuitive way. I wound up annotating in the book for future reference, which I something I don’t like to do. However, I really like the fact that the measurements are available as metric weights.

All in all, this brioche represents a two day process involving five hours of “work” each day, handling the dough every 1-2 hours. As a flat guess I was “hands on” for more than an hour each day.

In the future:  I’d like to hope it’s possible to get a comparable result without that many steps, but for special occasions, it’s a nice bread.