We planted the new salad table in early August. Last night we harvested this:

The harvest barely put a dent in the plant mass (Top shelf, L-R: “Little Gem” romaine, dill, spinach, “Jericho” romaine, cilantro, arugula) Behind the greens are the stairs to the front door — the salad table couldn’t be more conveniently located:

It’s supposed to get into the low 80’s the next couple of days. The salad table only gets sun until about 1pm, but I’m still concerned that something may decide to bolt and destroy part of the “work” we’ve put in. I’m hoping that the shade cloth will help discourage that:

I used a couple of shade cloth pieces we had lying around. There are 2 x 2’s  “attached” with cable ties to the front of the table. The shade cloth isn’t sitting directly on the greens, much. I’ll remove the shade cloth by the weekend — I’ve found I’m much less inclined to harvest greens if I have to fiddle with a cover. Easy and spontaneous is good.

One more picture — a quick weeknight pizza with roasted red pepper sauce (peppers from the garden), mozzarella, and arugula (from the salad table): 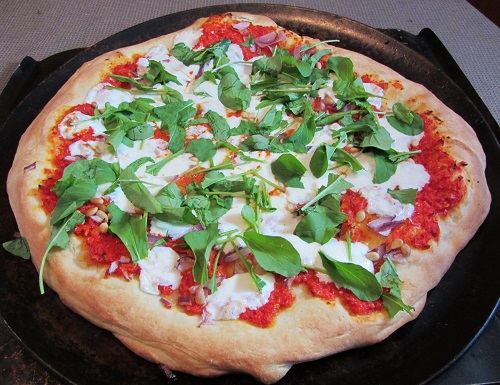