A day late on the update this week. Yesterday was a triple-header of sports:  Seahawks (on tv), Mariners (in person), and Sounders (raining hard in person). I’m still recovering.

This week the weather was cold, windy, and rainy. One day it rained as hard as I’ve ever seen it rain in Seattle. It was blowing sideways and running like waterfalls off of the roof. The temperature dropped down into the 40’s on a couple of nights. The peppers and tomatillos seemed ok with all of that. The tomatoes are finished for the year except for the Sun Gold plant. I believe we’re up over 200 pounds of stuff to date, so no complaints here.

On Friday I pulled all of the semi-ripe Roma tomatoes: 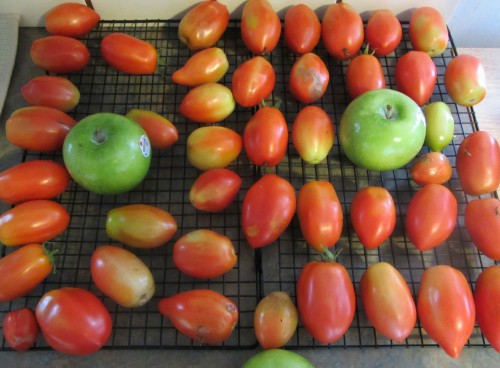 Today I pulled the rest of the tomatoes and almost all of the cucumbers. The cucumber plant is about toast (pic down lower in the post):

The shiso decided to flower:

Sweet peppers from the front:

Sweet peppers from the back:

Sweet peppers along the side:

I’ll need to figure out when the peppers will have to be harvested. They still look fine, but I’m guessing that might change in a hurry.