We had a socially-distanced birthday dinner on the covered back deck. Everyone got their own tear-apart Epi De Ble — instead of messing around with whole loaves and bread knives.

These Epi De Ble were inspired by this King Arthur webpage. Note that two Epi will fit on an 18″ sheet tray, at 150-175 grams of bread flour per Epi. The recipe below makes four Epi.

END_OF_DOCUMENT_TOKEN_TO_BE_REPLACED

It’s been a very mild summer here Vaguely-North-of-Seattle. We finally got a few days that could be called “very warm or hot” strung together and the basil really responded. Happy and productive basil means it’s time for panzanella (last week, didn’t get a picture), flatbreads (more below), and pizza:

The toppings are basil, roasted red pepper puree, and fresh mozzarella that I squeezed as much water as possible out of so it wouldn’t make the pizza soggy.

Recipe: 300g bread flour, 175g water (58% hydration), 6g olive oil (2%), 6g kosher salt, 3/4 tsp instant yeast. Knead and let rise 2-3 hours, folding the dough about halfway through. Preheat oven to 425F. Stretch the dough out over the screen, top with red pepper puree and bake 10 minutes. Top with mozzarella and bake 4-5 more minutes. Remove from the oven. After the pizza has cooled somewhat top with the basil, unless you’re ok with dark green wilted basil, in which case putting the basil onto a hot pie will work fine too.

END_OF_DOCUMENT_TOKEN_TO_BE_REPLACED

We really enjoy Salt Blade’s cured meats. The business is small and local and we like to support local artisans. Salt Blade is distributed in the Seattle area through Haggen’s, Met Market, and many other outlets. They also ship through their website. Tonight it was Pepperoni Pizza: 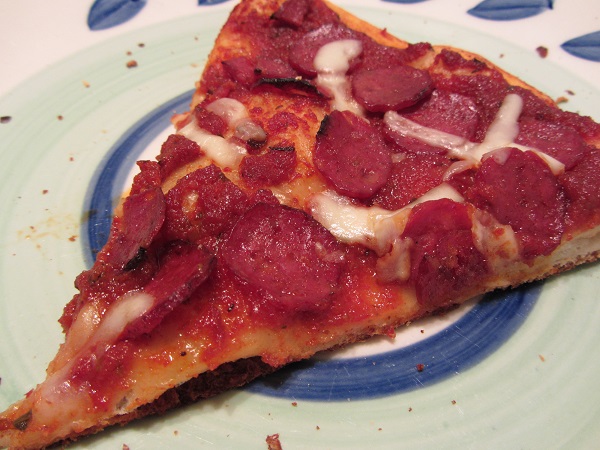 The full pie. It’s 1/2 really cheesy and 1/2 with sparing amounts of cheese: 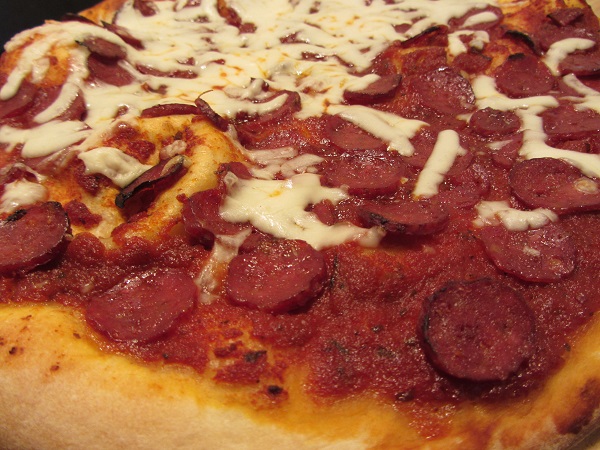 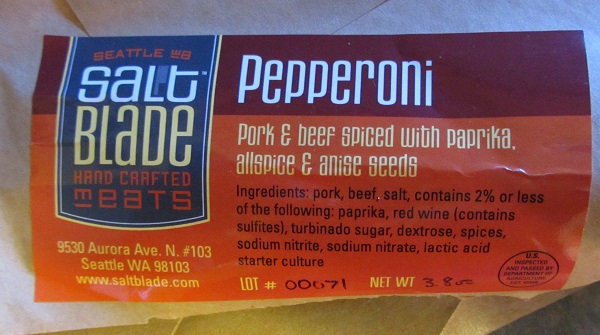 The pizza was topped with the pepperoni, a Roma tomato sauce from the garden by way of the freezer, and mozzarella.

The pizza dough recipe is simple: 300g bread flour, 160g water, 6g kosher salt, 9g olive oil, 1 tsp or less of instant yeast, depending upon how long you want to wait for the dough to rise. I used 1/4 tsp of yeast, let the dough rise for a couple of hours, then put it in the refrigerator until the next day.

The pizza was baked at 450F for about 15 minutes on a pizza screen. The cheese was was added at about the 11 minute mark.

Bread Basics – Class Outline page is now active. The page started in 2016 and is still a work in progress.

Our patio “Container Garden” consists of twelve EarthBoxes and three City Pickers. This year we’re going to leave a few idle, or fill them with a rotation of short-season veggies and greens. I don’t feel like this is the right summer to be committing to wrangling a jungle of big plants.

Here’s a picture of the almost-complete garden. you’re looking basically East. The first sun hits the grassy edge of the patio at around 10am and by 11am-1pm (summer day-length dependent) the rear trellises will be in full sunlight:

In the mid-left back there are two indeterminate Black Krim tomatoes sharing a box. Behind that under the trellis are Fortex (pole) beans in a City Picker box — 20 plants in a 4 x 5 layout.

END_OF_DOCUMENT_TOKEN_TO_BE_REPLACED

Three years in, we can now begin to harvest asparagus. For reference, the Space Invader cutting board is 12″ high:

The asparagus we started in 2016 ultimately didn’t work out due to poor planning and a bad location, so we tried again in 2018. This time around we have a much sunnier spot and raised beds to help the drainage and soil temperature.

A picture of the raised bed from this Container Garden Update post — June 9, 2019.:

Dinner will be asparagus with salmon and small potatoes.

Asian Chicken Soup From Things We Have In The House:

Hondashi, about 20 granules (optional, but good)

The green parts of Green Onions, cut into 1/4″ lengths

I really enjoyed this one, and we literally had everything on hand. It was also an excuse to get out of the house and go to the back yard for the alliums.

The whole recipe is a guideline really. Add/subtract almost anything and it’ll still be tasty.

My preference lately has been for cracker-style pizzas. From a technique and ingredients standpoint that generally means:

Low Hydration – This is what works for me. It’s possible to make crackers and crackery flatbreads with a wide range of water input. I’ve had the most success with smaller amounts of water.

The Addition of Fat/Shortening – Limiting gluten by interfering with the chains.

Docking The Dough – May be optional. I mostly use it when there are few or no toppings. It helps prevent the dough from poofing up like a pita.

Baking Longer At Lower Temperatures – To drive out moisture without over-browning.

END_OF_DOCUMENT_TOKEN_TO_BE_REPLACED

Two of the menus were personalized, which was a nice touch. (Whited Out in the pictures below.) The “25” in the background of the menu commemorates Thomas Keller’s 25 year association with The French Laundry. The other shape in the background is a traditional clothes pin. We received a clothes pin as a souvenir that had “THE FRENCH LAUNDRY” logo printed on one side and “IT’S ALL ABOUT FINESSE” on the reverse.

The Vegetable-based Menu that we chose not to do:

The menu we selected, signed by sous chef Sean O’Hara. If there was an “Option” on the menu – one of the two of us selected it so that we could try everything:

END_OF_DOCUMENT_TOKEN_TO_BE_REPLACED

From the Bread Baker’s Apprentice — Peter Reinhart’s Double Celebration Challah. The “Double Celebration” indicates a double-decker of braided dough — a smaller braid sits on a larger braid. I increased the recipe by 1.5x because we were feeding a crowd:

and Sesame Seeds for garnish.

1.  One day ahead of time, combine 10.5 oz of water and bread flour in the bowl of a stand mixer. Cover with plastic wrap and leave it at room temperature. (It’s a simple Poolish without yeast. This would also be fine up to three days in the refrigerator, if so, remove from the refrigerator at least 2 hours before continuing.)

2.  Stir together 15 oz flour, sugar, salt, and yeast. In a separate (mixing) bowl combine butter, eggs, and yolks. Turn the mixer on low speed. Add the wet ingredients to the mixer, then slowly add the dry mixture until the ingredients gather and form a ball.

2.  Mix on medium low speed for 6 minutes, adding more flour if needed to make a dough that is not sticky.

3.  Lightly oil a large bowl. Form the dough into a ball, coat with oil, and let rest one hour, covered.

5.  2/3rds of the dough becomes the big braid, and 1/3rd becomes the small braid. Each of those portions are divided into 3rds again, and rolled out into ropes which are smaller at the ends and larger in the center. The ropes are then braided, tucking the ends underneath. Watch this for help on how to braid. Transfer the big braided portion to a parchment lined baking sheet, top with the smaller braided portion.

6.  Brush the loaf with an egg whites wash, spray with oil, loosely cover with plastic wrap, and let rest 60-75 minutes until the the dough has grown to 1.5x its original size.

7.  Preheat the oven to 325F. Brush the loaf again with egg wash and sprinkle with sesame seeds. Bake on the center rack for 20 minutes, then turn and bake another 20-45 minutes. The bread is done when golden brown and an instant thermometer reads 190F. (The pictured loaf saw 25 minutes after turning, which I think was too long. More on that below.)

8.  Transfer to a cooling rack and wait at least an hour to eat. 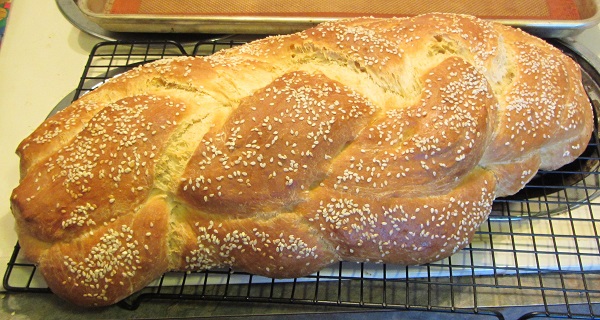 I think every time I’ve made this I’ve come away thinking it could be better.  20 minutes + 25 minutes brings the internal temperature closer to 205F than 190F. In the future I’ll likely check the temperature at about the 20 + 15 minute mark. I also think the challah would benefit from a little more salt than the recipe calls out, perhaps even just an extra 1/2 tsp to take the total to 2 tsp (not including the salt in the eggs.)

We had a little bit of extra dough at the end of one of the braids. We were going to visit a 6-year old on Thanksgiving, so:

In reality the “body” is about 4 inches across. It has an “eye” of sesame seeds and a piece of black sea salt. The “turkey” went into the oven with the challah and was pulled at the 25 minute mark.

The kid seemed to dig it.