Easter called for another Challah, this time I tried Peter Reinhart’s, from his book Artisan Breads Every Day. (Last year was his “Double Celebration Challah“. For comparison, here is my 2nd attempt at Rose Levy Beranbaum’s Brioche, a recipe which I found to be a pain to parse.) 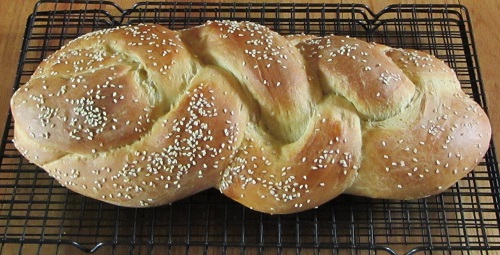 The recipe is here, on Michael Ruhlman’s website. Note that I halved all of the ingredients — I didn’t need to make two loaves. I don’t know why Reinhart often writes recipes for two (or four, or eleventytwelve) doughs. Though at least this time he used grams, so I didn’t have to mess with figuring out what a one-third portion of 7-1/4 cups of flour computes to.

I like this recipe better than either of the other two that I referenced at the start of this post. The Double Celebration Challah calls for an indeterminate amount of water, 10.5 to 12 ounces — that’s a big range! The Beranbaum Brioche recipe is very poorly worded, and I feel like the recipe is broken into more steps than is necessary.

From a taste standpoint, this Challah was better 2015’s. It may be that including the optional vanilla extract made a difference, though no one mentioned that they detected it. I also think the salt level was very close to correct this time, in contrast to the 2015 bread which seemed to be lacking salt.

Overall it’s a low-hassle, nice tasting bread, and it’s attractive too. I can see making this again even if it isn’t a special occasion.