The salad table peaked a little earlier than I had intended. Here’s September 19:

I clearly got overeager — most all of the seeds were planted at once. When October turned out to be warmer than usual it meant that the spinach was done before the cool weather kicked in. I replanted it in the top center of the box on October 10th, but the current growth is still less than 2″ tall — basically invisible in the photo above.

The flip side is the Miner’s Lettuce(!) It’s native to around here, and it’s loving the cool wet weather. I doesn’t even seem to mind the shade in the back of the table. It basically out-competed the mache on the lowest shelf, though we may find some mache buried in the thicket if we “weed” enough: 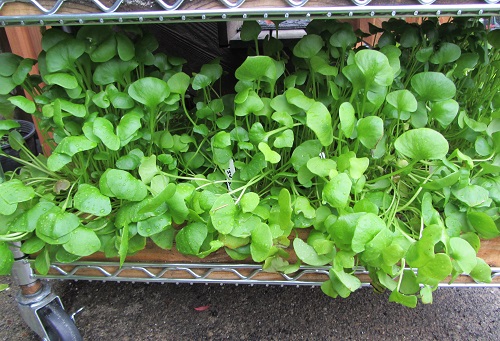 I’ll be interested to see how the Miner’s Lettuce holds up over the winter. I figure we’ll let this combination of plants run until late spring, then try New Zealand spinach and whatever else looks especially bolt-resistant. I’m open to plant-variety suggestions — No reason to fight the hot if the salad greens won’t tolerate it regardless.

Bonus pic of the scary front yard. The “gravestones” are concrete blocks wrapped in foil. The blocks themselves are flat on one end and rounded on two corners. The rounded corners became the “tops”:

2 thoughts on “A Salad Table Update”