Earlier this week we came into possession of a goodly amount of Chanterelles. As in previous years, that meant we’d pass them along to Iron Chef Leftovers, and he’d cook dinner for us. (More on that later.)

We needed something to sop up sauce, and a regular No-Knead Bread wasn’t going to fit into the schedule, time-wise. I chose instead to go with overnight-rise baguettes. The recipe was a fairly standard french bread dough:  450 grams bread flour, 270 grams water (60% hydration), 10 grams salt (2.2%), and 1/4 teaspoon instant yeast (the same amount of yeast as is in the “regular” No Knead Bread.)

The thing was, I also chose not to do an initial knead.

In the morning the dough wasn’t looking promising. There was very little sign of fermentation, and the dough was nowhere near evenly hydrated — there were clumps of almost dry flour.

So I brought the dough to work with me. About every 90 minutes I did a few stretch and folds on the dough and tried to pinch out the really dry parts, then I snuck off to the washroom to rinse the bits of sticky dough off of my hand. (I needed to keep a non-doughy hand for the restroom door, right?)

By the time I got home, the dough was ready to be shaped. To do that:

1.  On a lightly floured counter, cut the dough mass into three mostly equal pieces, then spread the pieces out into rectangles about 8″ x 6″ x 1/2″

3.  Use your hands to roll/stretch the doughs on the counter until they are just shorter than a baguette pan. (Start from the centers and work outward.)

4.  Line the baguette pan with floured linen, place the doughs into the linen, then cover with more linen and let rise for 30 minutes.

5.  While the doughs are doing their final rise, put 3 cups of water into a large dutch oven. (No lid) Place the dutch oven on the bottom shelf of the oven. Preheat the oven to 450F.

6.  When the oven is really steamy, remove the linen from the baguette pan, score the doughs, and bake them for 10 minutes.

7.  After 10 minutes, remove the dutch oven, turn the baguette pan around, and bake for another 7-10 minutes. 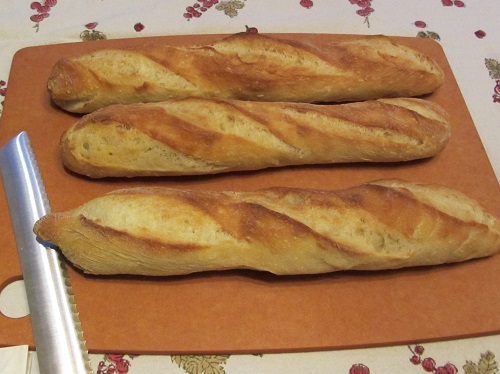 For years, I’ve been messing with different ways of producing steam in the oven. I think I’ve finally found a method that I’m happy and comfortable with — I don’t want to spray the sides of my oven, and the other techniques that I’ve tried haven’t made adequate steam.

But three cups of water in a 7 quart dutch oven seems to work pretty slick. Learning!

Also, 450F is warmer than I’ve historically baked baguettes. I think the crust came out better than usual, so my current plan is stick with that temperature going forward, or perhaps try an even hotter oven.

The bread was an accompaniment to best Best. Dinner. Evar. Iron Chef Leftovers totally topped himself, and I can say with all honesty that I’ve never had a better meal. 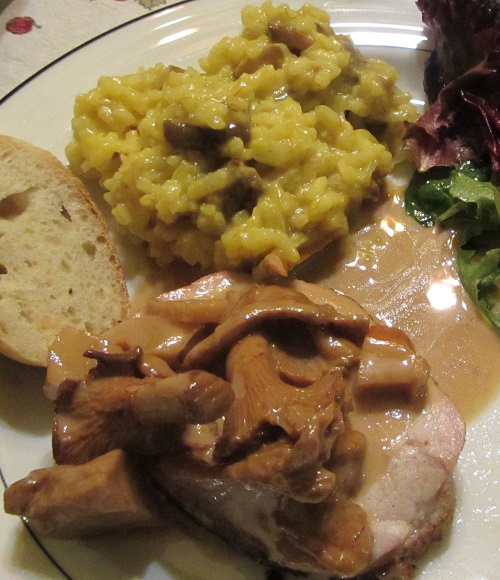 I feel like I’m finally starting to get a “system” of steps for baguettes. There’s still a lot of room for improvement, but I feel like I’ve now worked out enough variables that progress should be easier to quantify — I won’t be stabbing in the dark quite as much as I have been.

And as always, failure is an option, but the end results taste good regardless.

10 thoughts on “Bring Your Baguette Dough To Work Day”