We harvested the last 9.8 pounds of tomatoes this week.

Monday saw us harvest everything except for the non-ripe cherry varieties: 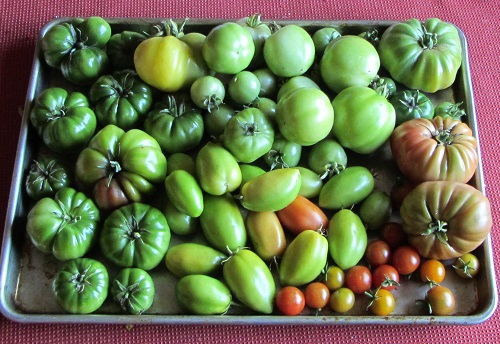 Today we brought in the cherries. The girl cat is checking the sheet tray for potential deliciousness: 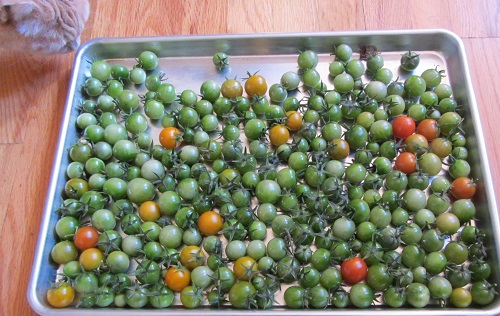 We removed the remaining tomato stems and cages today. Later this week we’ll plant Mache in those four boxes.

This year we only weighed product from the EarthBoxes. We also didn’t count any overwintering veg, since the total was pretty paltry, and I was bummed out by the paltriness. Still, we harvested 282.5 pounds from the EarthBoxes — all of it between June 24 and October 4. That’s about 8.5% more veggies than in 2014.

For reference, 282.5 pounds comes out to just under 8 pounds of product (7.84) per square foot of growing medium. I’d guess that we’re getting close to the upper limit for our situation, short of swapping out the basil for something heavier — and that’s not going to happen.

Each year I’ve done four garden Recap posts, looking at what worked, what didn’t, and what we think we might have learned. I’ll likely do the 2015 version of those posts over the next couple of weeks. As it gets colder I’ll also do updates on the progress of the new salad table and the status of the winter veg.

Looking forward to it.