I can’t imagine how blown away ancient man must have been when introduced to the concept of planting seeds. I’d guess that it happened like many other of humanities’ great discoveries — totally by accident. Uneaten seeds were thrown into a “garbage” pile, and after a while the garbage pile sprouted food. I’d like to think it wouldn’t have taken that long to figure out what was going on, but with people being people, who knows?

I broke down and attached a spare piece of netting for the peas. I’m sure it’ll improve the results.

As an aside:  We went to the local P-patch today to look around — Lots of peas, lettuces, carrots, and various types of alliums. Some tomatoes and tomatillos. One tiny little bit of corn, and one of beans. A little bit of squash. Not a cucumber in sight. The groupthink seemed almost monolithic in its decision making.

That doesn’t make any sense to me. Our cucumbers out-produce everything expect maybe the tomatoes. Maybe they’ll all plant cucumbers after the peas are done?

My guess is no. The food bank boxes are densely planted and well maintained. The other boxes, not so much. It might be because they’ve got so much space to play with, but to my mind they’re “wasting” a lot of it. There are “big” areas with nothing going on… Today is basically June 1st, shouldn’t there be something growing? (Or maybe it’s just me, and that having to deal with super finite space all the time has made me feel like wasted space = wasted opportunity. It’s really my problem, not theirs…. Nah.) 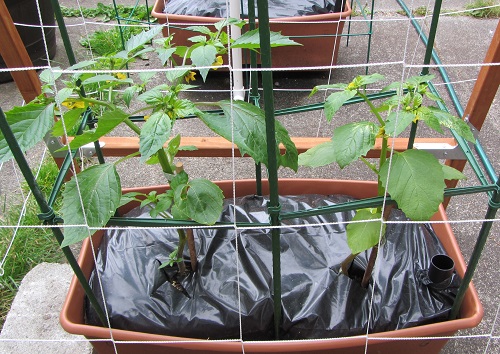 The tomatoes, with the Tromboncino in the back. Nothing is huge yet — the tallest of the indeterminates are about waist high. (The Sweet Millions, middle left.) Note the pvc attached with cable ties for cage support and the labels attached with clothespins. It’s less work, and less thinking every year that we continue to do this — those are old, and preassembled ideas. (Just like the new trellises this year, next year we won’t have to build them again.) I’ll likely reference this photo again in about a month for comparison:

It’s been cloudy the last few days, but it’s not stopping the peppers:

The Tromboncino. There are four plants, one in each corner of the box. They’ll need to be coaxed to the sides and onto the main trellis soon. I added some netting going from the box to the sides, just it case it helps:

Note the repurposed binder clips, holding the net onto the box. Those were used to attach the row covers this last winter. The clothespins now securing the labels did double duty that way too.

I really enjoyed this cat meme. Here you go: