You may have heard that the Seahawks traded for “Pro Bowl TE Jimmy Graham”. What that means is that during a game this fall you’ll hear an announcer say something like “Last season Jimmy Graham was 2nd among Tight Ends in receiving yards.”

Categorically ignore those statements. Jimmy Graham isn’t really a Tight End. He lined up wide on 67% of snaps in 2013. He doesn’t block much. During his last salary negotiations an arbitrator ruled that he was a Tight End, but that’s really just because the NFL nomenclature for hybrid Tight End/Wide Receiver pass-catchers hasn’t caught up to reality.

Graham is 6’7″ and 265 pounds. He’s more of the class of Tight Ends that includes Tony Gonzalez and Antonio Gates — guys who are basically great big basketball players who don’t quite fit in the NBA and aren’t really asked to block like a traditional Tight End. Calvin Johnson and Andre Johnson are reasonable comps too.

They’re all just pass-catchers who are matchup nightmares — too big to be covered by a Defensive Back and too fast for a Linebacker.

From there it’s a sliding scale to the big, pure wide receivers like Dez Bryant and Julio Jones at 6’2″, 220 pounds.

Given that Wide Receivers make more money than Tight Ends, the odds are high that the next “Jimmy Graham” insists he’s a Wide Receiver from the get go.

A special shout-out to Harold Carmichael, one of my favorite Wide Receivers of the 70’s and early 80’s. Carmichael played at 6’8″ and 225 pounds. He was a four time Pro Bowler, was named to the NFL’s “70’s All-Decade Team”, and is in the Eagles Hall of Fame. Excellent, fun, and unique player. 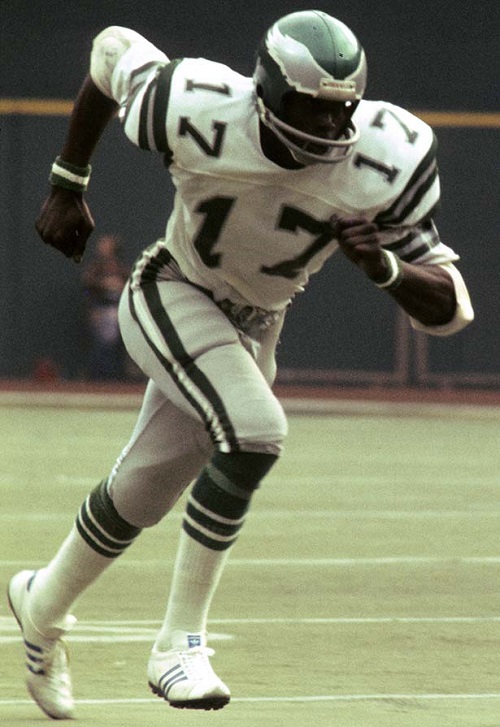 2 thoughts on “The Pass-Catching Jimmy Graham”