The windy, rainy weather isn’t slowing down the zucchini. It’s nearly to the top of the 8′ trellis:

And today. I think that the fruit grew overnight. It’s now about 7″ long. I’ll need to figure out when it’s supposed to be harvested:

The tomatillos. “Mexican Strain” on the left. “De Mipa” on the right. Very different growing habits, the “Mexican Strain” is way beefier and is much more upright. I think they’re ahead of where they were last year: 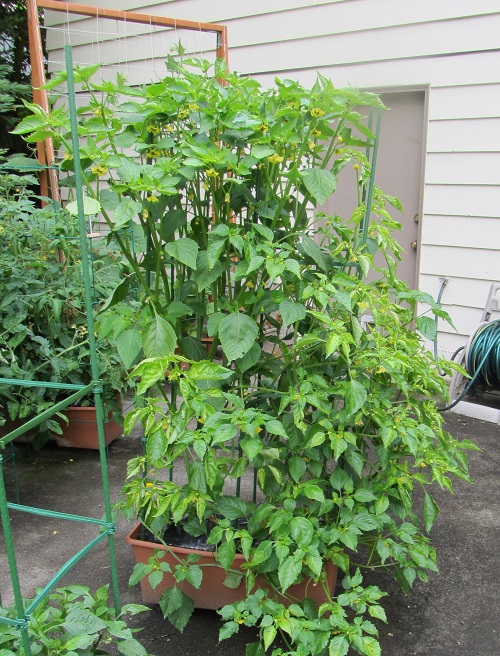 The cucumbers are well ahead of last year as well:

The Oregon Spring tomatoes are moving right along. I’ll dose all the tomatoes tomorrow with Calcium Nitrate to discourage blossom end rot. (It just started raining again as I type this.):

An overview. Tomatoes on the left with the zucchini near the house. In the foreground is the basil, peppers, and brussels sprouts under the tulle. In front of the door are the tomatillos. To the right of the tomatillos are the cucumbers:

And as promised, a girl cat picture. Here she is watching a show about bicycling. Bicycles were zipping by the camera, which was infinitely interesting to her. I think this guy owns a shop or something: