Along with the Hoppin’ Frog Double IPA came their Hop Dam Triple IPA. This thing was a monster at 10% ABV and an indeterminate amount of IBU in a 22 oz. bottle that ran about $16. Give the nutty numbers on the double, I had no idea what to expect from this beer.

Some say “bigger is better!”. At Hoppin’ Frog, we built a massive hop dam to handle the enormous amount of hops added to this colossal American Triple I.P.A. An intense experience of citrus and piney hop character is complemented by layers of rich malt flavor. Behold our new standard for hoppy beers. 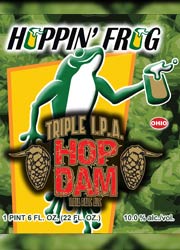 The beer pours hazy orange in color with a significant amount of sediment in the glass. Boozy and floral with strong notes of citrus and orange blossom and not much else on the nose. A very tea like quality on the first sip – tannic and bitter, so much so to the point of overwhelming everything at first. Once your palate has a chance to adjust and settle in, the beer becomes rich and full of citrus with a significant but pleasant bitterness. The finish is long with plenty juicy citrus and black tea that just lingers (there was one other flavor component on the description, but I can’t read my own writing – it looks like dilberness, whatever the hell that means). The beer surprisingly has no discernable alcohol burn making it surprisingly easy to drink from that respect, but the balance could have been a bit better, bringing out some of the more subtle notes in the beer. In all, this beer reminds me of where West Coast IPA’s made on the West Coast were about 10 years ago when it was a race to see how many hops they could fire into a beer. It might be the new standard for hoppy beers, but give me a Pliny or a Blimey any day.

Hoppin’ Frog Hop Dam Triple IPA crosses the road with 3 Froggers out of 5.