Let me be right up front, I had absolutely no idea what Feijoa was prior to buying this beer. I did end up buying it because it was collaboration with one of my favorite breweries – Brasserie Dieu du Ciel! out of Montreal. In case you are wondering, the exclamation point is actually part of their name and it translates roughly as Oh My God!, which is the reaction that you have with a good number of their beers. They were one of the first craft brewers in Montreal and have been at it a long time. Just a handful of their beers get bottled and even fewer make their way out to the west coast. You can find them occasionally at the better bottle shops. The Lips of Faith was available in 22 oz. bottles for around $7 and the beer clocked in at a robust 9.4% ABV.

About the beer, well I will let New Belgium’s website fill you in on the details: 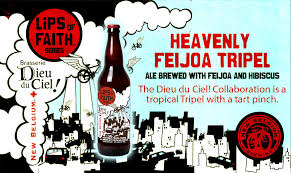 The beer pours deep golden, almost toasted brown in color with yeast and malt dominating the nose and hints of floral hibiscus and light pineapple hiding in the background. The palate is interesting – the beer starts out with noticeable Belgian yeast moving quickly into a mild dry tartness, similar to what you would find in a beer made with cranberries, before changing direction and bringing out a sweet mango and pineapple component that decides to stick around a bit longer than the first few notes of the beer. The finish is dry with hints of banana and coriander coupled with a slightly floral character of hibiscus. The flavor progress quickly when the beer is first served, but as it warms they become more distinct and linger for longer periods of time, providing a nice transition and balance into the complex flavors. The alcohol was completely unnoticed despite its high ABV and this beer was an interesting exercise in deep and tropical character.

New Belgium Lips of Faith Heavenly Feijoa rocks in and cries out 4 No Hiding Places out of 5.