It feels to me like fall is coming, and the plants agree. The lemon cucumbers will need to be pulled soon. The regular cucumbers aren’t far behind. More and more fruits are dropping off of the plants, especially when the hard rains come, so today we  pulled all of the tomatoes that looked like they were at least 95% of the way there — I’m not sure that some of the varieties are intended to be uniformly red all the way to the stem, anyway.

(All pictures taken during a heavy rain.)

Today’s harvest. The Brandywines in the back right average about 5″ in diameter and 1-1/4 pounds each. It’s basically six tomatoes weighing 8 pounds total:

At the start of the year the cucumbers were straight, dark green, and relatively round on each end. Then we started seeing more twisty ones with bulbous ends, and straight ones with tapered stem ends. Now they’re coming in much lighter in color and misshapen. The first little one to rot on the vine happened this week. Note the two different colors here, and the moldy leaves — I’m guessing this is how the cucumbers tell you they’re about done:

The basil, with the lemon cucumbers to the left and tomatoes in the rear. The color of the basil is still good, though it’s continuing to get leggier. For reference, the table is “bar height”.

The Romas and Brandywines:

The Sun Golds with the Romas and Brandywines in the rear. It’s no wonder they’re called “vines”:

Finally, a box of dirt. I went to the nursery a couple of days ago and purchased some Romaine seeds. The first little starts are popping up. (They’re virtually invisible in the picture.) The directions on the seed package say to keep them “uniformly moist”. It’s a good thing the EarthBoxes drain off excess water: 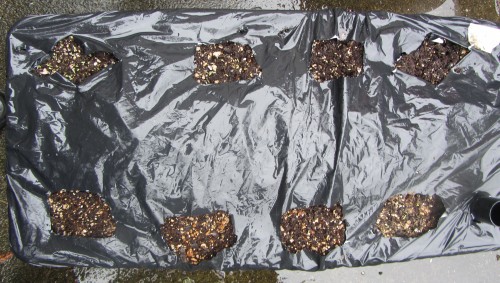