There are issues with the zucchini, and I think there is more than just one thing wrong with them. The symptoms:

1.  The patty-pan leaves are more yellow overall than it had been. (It was never as dark as the cucumbers or the cocozelle.)

2.  The cocozelle has fruits that are rotting from the blossom end. I cut off four bad fruit yesterday.

3.  Sometime in the last week white mold appeared on the cocozelle.

Which is kind of strange, because the cocozelle has produced seven pounds of fruit in the last few days. I thought it was ramping up for the summer.

My totally stab-in-the-dark diagnosis is that the fruits are experiencing blossom end rot caused by a calcium deficiency. (Which I’m pretty sure is correct after looking around the interwebs.) I’m also of the suspicion that the plants need fertilizer. I dosed the feed tube with a 14-14-14 granular fertilizer and calcium nitrate last night. In retrospect, that’s a double dose of nitrogen, which will be either good, bad, or indifferent, but, why not? I also pruned the heck out of the two plants, removing all of the really yellow leaves, as well as the most beat-up older leaves and the leaves with a lot of mold. The intent is to let more air and sunlight in, and to try to make it so that all leaves are getting more optimal use. Finally, I sprayed the plants with an organic mold inhibitor. The aftermath:

Zucchini from the back:

An overview from the front. Note the size of… everything. The tomato plants are taller than the door. The cucumber is over head-height as well. After I finish this post the zucchini and cucumber are going to get moved away from each other. I don’t think it benefits either one when they’re close. Plus, I don’t want the zucchini giving the cucumbers any ideas about what “healthy” looks like. 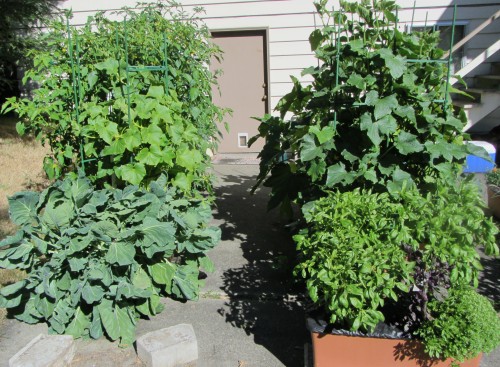 The peppers. I think the one of the right is going to ripen to purple, which is *not* how the plant was labeled when it was purchased. Now I’m not sure I think I know what it is. 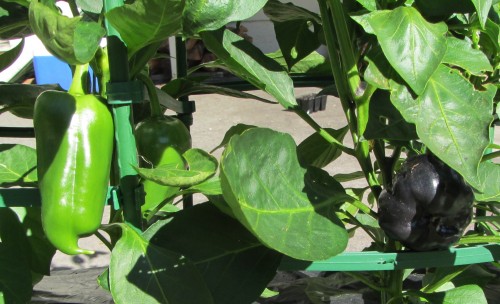 Finally, the Sun Gold tomatoes. Conservatively, there are 40 fruits on the plant. Hopefully this time next week they’ll be ripening: