Title:  Bang!  (We own Bang! The Bullet, which includes the expansions.) 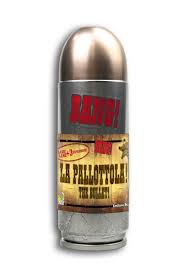 Complexity of Rules:  Low. It’s a party game rather than a “deep” game.

The Concept:   It’s a spaghetti western! One player plays as the Sheriff. All of the players know who the Sheriff is. Everyone else secretly plays either as a Deputy, an Outlaw, or the Renegade. The Sheriff and Deputies win if they kill the Outlaws and Renegade. The Outlaws win if they kill the Sheriff. The Renegade wins by killing everyone except himself. In addition to that, each player plays as a random (in)famous person from the old west — all featuring different bonuses and drawbacks.

At the start of the game you only own a pistol, and you can only shoot at the person next to you. You can increase your reach around the table by drawing a rifle card, or a scope card. If you get a horse card it effectively makes you further away from your enemies. You can hide behind barrels. You can pass lighted dynamite around the table. You can recover health by drinking beer..

Why I Like It:  It’s fun, fast, and violent. A big part of the game is figuring out Who is Who, or at least Who you think is Who. The secret roles mean that there’s often a feeling out process before the shooting begins in earnest, but once it does the game can get really chaotic. It’s light on strategy, but playing smart still helps.

We bring it out almost every GNOIF, and it’s always a hit.