GNOIF #20 recap — GNOIF:  What GNOIF Does In The Shadows (Death/ Horror/ Zombie/ Vampire themes.) The title is a reference to this silly (and highly recommended) vampire mockumentary.

GNOIF #20 actually fell on Halloween. That meant record attendance. It also meant more of a “party/casual” atmosphere than usual. Basically everything that got played could be considered a “light and social” game.

That meant that we didn’t play Last Night On Earth, though prior to game night we’d made a point to buy a 24-pack of Sharpies to give the figures some color. 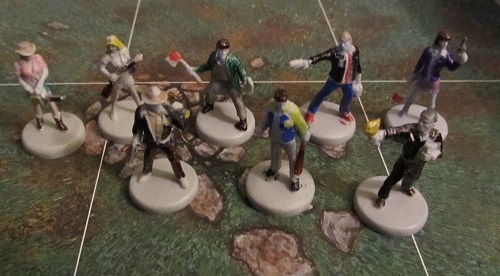 I’d like to think the “painting” helps make the game a little more immersive — at the very least it’s definitely easier to tell the heroes apart. (Note that we could have painted them, but I’ve seen lots of stories on BoardGameGeek about how paint “bubbles over time” on the figures from this particular game.)

I played Zombie Fluxx for the first time with the Creepers. Maybe I’m an old school Fluxx curmudgeon, but I’ve never felt like Creepers add anything to the regular “Fluxx” game. I do feel like they add something to Zombie Fluxx — I think the zombie creepers make more thematic sense than the creepers the other Fluxx variations. Also, it’s fun shooting zombies, and redirecting their attention to the other players.

Thanks to everyone who played and made it a fun evening!