There’s a first time for everything, and last night’s first time was Enchiladas — the homemade, non-nuked variety.

It’s not like they’re hard to make, but I don’t think I’ve ever had leftover chicken, leftover spicy tomato sauce, cheese that needed to be used, corn tortillas … all at the same time. I’ve always looked at the ingredient list and said: “There’s no way I’m cooking chicken and shredding it just so that I can wrap it up and cook it again. 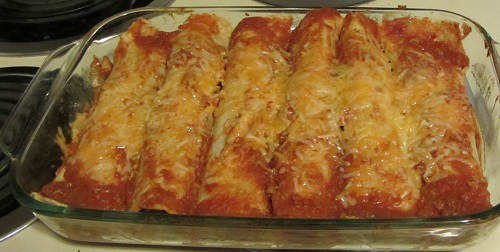 To be fair, I also skipped the traditional “dip the tortillas in hot oil, then in sauce”. I just used a lesser amount of sauce to make it cleaner and faster. It seemed to work out o.k., and it occurred to me as we were eating: “This is just quick and easy stuff to throw together out of whatever’s in the refrigerator, along with tired corn tortillas.”

I now think Enchiladas were actually “invented” as a way to use up leftovers.

The inspiration for trying to make Enchiladas came from this book:

It was published in 1985, and at least according to the reviews on Amazon the book features a fairly authentic collection of recipes from Santa Fe.

I wonder sometimes if it’s also “trapped in 1985”, though the reviews don’t seem to reflect that.

I’ve had good success with it, using it for everything from sauces to the enchiladas to homemade corn tortillas. It’s cheap, too.