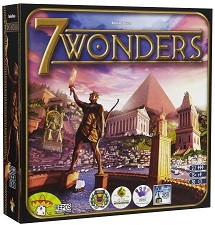 Complexity of Rules:  Medium-Low. With a little explanation it’s a good gateway game. (A gateway game makes for a good introduction to “modern” boardgames, without being too crazy complicated or having a million rules.)

Time to Play:   60 Minutes. The box says 30 minutes, which might be true with just a few players if everyone recognizes all of the cards and their implications on sight.

The Concept:   7 Wonders is centered around Card Drafting. What that means is that each player starts with a hand of seven cards, selects one to become part of their civilization, and passes the remaining cards to the player on their left. Rinse, repeat. Many of the cards have a cost (in wood/ clay/ gold, etc.) that needs to be met in order to buy them. The strategy is to purchase cards that help you advance your civilization the most and deny cards that help your neighbors.

Why I Like It:  Like any good game, 7 Wonders requires a series of interesting decisions. There are lots of ways to win — players can receive victory points by focusing on any of:  Improving Science, having a powerful Military, becoming an economic juggernaut, building an ancient Wonder, building Civic structures, and more. Or by doing any combination of those things in the right doses. The trick is that it’s a multiple player game — you have to decide how much you want to screw your neighbor at your own expense, and what form that screwing is going to take. You can lose both by ignoring your neighbor, or by giving them too much attention. It’s a balancing act.

I’m big fan of limited downtime, and in 7 Wonders all players make their plays in unison. The decisions to be made aren’t simple, but they’re not crushingly complex either. As a result the game moves reasonably briskly — our 2nd playthrough with three players took an hour, and that was with us consulting the “Description of Symbols” sheet on multiple occasions. The symbols can be somewhat arcane early in the learning process.

7 Wonders is fairly easy to learn, and we’re a long, long way from mastering it. It’s the #17 ranked game on BoardGameGeek and the winner of multiple awards. Highly recommended.

One thought on “Recommended Game — 7 Wonders”