Cedar’s on Brooklyn has an awesome Pesto Naan. Really, everything there is tasty and very reasonably priced. Try anything from the tandoori oven, but don’t go when it’s dinnertime. To quote Yogi Berra: “Nobody goes there anymore. It’s too crowded.”

I thought I’d try to replicate their Pesto Naan, only without the tandoori oven. I selected the Joy of Cooking recipe as a jumping off point and came up with this:

The Joy recipe calls for adding 1-2 tablespoons of water as necessary to make the dough come together. I added 2-3 tablespoons.

I kneaded the dough on low speed for 8 minutes, then set it aside to rest for 1-1/2 hours. While the dough was resting I made a simple pesto. So far so good. Time to preheat the oven to 450F.

I divided the dough into two pieces and rolled each piece out thinly. I then spread the pesto over one round, topped it with the other round and sealed the package.

It sealed ok, but then I decided *that* wasn’t good enough. I tried rolling out the package at little more and managed to irreparably split the seam. Bad idea #1.

At that point I said “Ok screw it. Let’s put it in the oven and see what happens.”

Unfortunately I selected the perforated pizza pan that I like so much. Unfortunately as the pesto heated up it exuded a bunch of oil. Unfortunately that oil leaked out the sides of the naan and caught fire on the bottom of the oven.

It wasn’t a *big* fire, but it was big enough to be a concern. I grabbed the nearest towel and yanked the mostly cooked dough out of the oven. No sense feeding more fuel into the fire. Plus, I’d put some energy into the naan! I was torn between dosing the fire extinguisher into the oven or just riding it out. I couldn’t figure out how to work the fire extinguisher, which was just as well. The fire burned itself out in 3 or 4 minutes.

“Well heck, the fire is out. I’ll leave the oven turned off and put the naan back into the oven to finish cooking — on a sheet tray this time.” 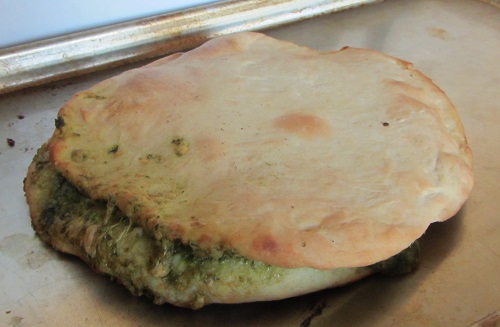 The bottom was a little too dark, but overall it was a winner.

As an added bonus I’d managed to throw a piece of orange plastic into the oven as part of the rush to yank out the naan during the fire. Chiseling melted plastic out of the oven is so much fun!

Note to self:  No perforated pans next time.