If you subscribe to the national IPA championship results, generally the best IPA’s are from the Midwest, particularly the Cleveland area. Of course those results are skewed since they are basically a popularity contest held at a bar within driving distance from Cleveland and it is not a blind study, so I believe there to be a great deal of bias in the results. Fortunately for me, I do have a friend who lives in the Cleveland area and he has sent me many of these “great” IPA. One of the breweries that a recent shipment contained was Hoppin’ Frog. I had some high hopes for their beers since they have won a ton of medals at the GABF as well as other competitions. First up was the Double IPA. It arrived in a 22 oz. bottle and carried a price tag of $11. According to the label, this beer was 8.2% ABV and 168(!!) IBU.

Explore the extremes of hops, and experience all of their bitterness, flavor and aroma with this Double I.P.A. An extreme, super-assertive and satisfying amount of American hop character is balanced with a toasty, caramelized, intense malt presence. 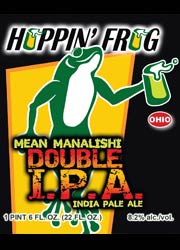 The beer pours deep orange in color with high amounts of hops and hints of grain and caramel on the nose with just a touch of floral character. The beer starts off on the palate with significant amounts of fruit and citrus peel before mellowing out a bit into a significantly bitter grain character. The finish is long with a huge amount of citrus and peel with slightly floral characteristics and a very light caramel note. There is a touch of resin and alcohol burn at the end but overall the finish is pleasant and enjoyable. The balance is good, but I expected a bit better given the pedigree – the alcohol was not off putting, but probably should have been a little better balanced and I would have liked the beer to show a little more malt and a little less bitter as the bitter was occasionally overwhelming the malt at times (this is why you don’t just keep ramping up the IBU in a beer). Overall it was a great drinking experience (although the bottle may have been just a touch past its prime) and definitely worth trying if you get the opportunity.