If you live in the Northwest, you have probably seen Laughing Dog’s beers in most places, including your local megamart, and just not bothered with them. If you are doing that, then you are definitely missing out on one of the better breweries in the Northwest and one that, despite wide distribution, really seems to fly under the radar. They make some killer IPA’s and a few years back, they started putting out an Imperial IPA, available in 12 oz. bottles for around $4. Knowing that I love their other beers, it was time to give the imperial a shot, especially since I found out that this beer was finished with honey. 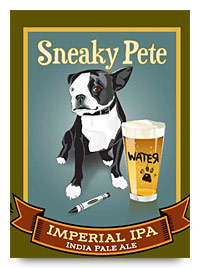 The beer pours deep amber red in color with a tan head. Notes of honey, caramel and hops dominate the nose with floral notes and light hints of toffee in the background. The beer starts off fairly mild on the palate with light malt sweetness before quickly moving into what you would expect from an Imperial IPA – strong notes of citrus and grapefruit with hints of resin first make an appearance before yielding to a significant pleasant bitterness that fades into a spectacular finally where the hop character is joined by a touch of sweetness and a touch of caramel that lingers and intermingles with the citrus bitterness, creating a sweet and bitter dynamic.  The balance on this beer is superb and the layering complex with the added bonus of the 10% alcohol being completely unnoticeable, making this beer surprisingly easy to drink. My biggest surprise with this beer is that they honey adds a noticeable depth and very light earthiness and manages to not be overpowered by the bold hop flavor in this beer.

Laughing Dog Sneaky Pete grabs its leash and takes you out for a walk with 5 big dogs out of 5.