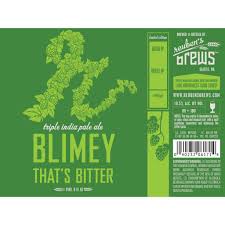 It takes some guts to do an imperial IPA as a cask, not only because these beers are a monster to brew, but you run the risk of having something that is borderline undrinkable with all of the alcohol and hops involved. Reuben’s took a chance by putting Blimey on cask, of course adding more hops to the cask, because, you know, it wasn’t hoppy enough.

The beer pours hazy orange in color with a mind numbing amount of citrus and citrus peel – it smells like fresh orange rind with bare notes of orange blossom and grain. The beer starts out lighter than its carbonated cousin with a slightly sweet/floral component before moving into juice oranges, orange peel and orange blossom. The finish is incredibly smooth with significant hop bitterness with plays well with the citrus and a touch of resin at the very end. The alcohol isn’t perceptible in the cask version of the beer, but the resin is, giving the beer a touch of burn at the back of the throat at the very end.  The fruit is definitely more pronounced in the cask version, so if you like citrus dominant IPA’s, this is the one for you.

Was the cask version better than the regular? That is a tough call since they drank like 2 very different beers. Either way they were both fantastic and worthy of the 5 hop cones out of 5 that the cask version receives.