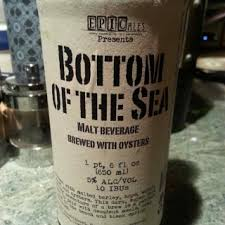 I like beers that are different; it makes drinking beer fun since I don’t tend to get caught in a style rut. I also, when I am in the mood, love sour beers since they tend to jumpstart the palate and, when they are done right, are as complex and deep as any beer out on the market. Epic Ales out of Sodo in Seattle cover both of those points – they make beers that are definitely different and they do a bunch of sour based styles. On a trip to Bottleworks, I noticed Bottom of the Sea – a beer brewed with oysters and wasn’t a stout. Actually, I had no idea what style it was until I opened it – it was a gose, an obscure German sour style. I figured that for $5 for a 22 oz. bottle, it was worth the shot. The beer is just 5% ABV and a minuscule 10 IBU.

The beer pours jet black with a creamy brown head and shows lots of malt and barley on the nose with light amounts of roast, hints of what reminded me of pilsner yeast and a vague smell of salt air. On the palate, the beer betrays its dark color by showing light on the palate with a hint of sourness upfront that gives way to salty malt and grain, before finishing with a long sour cherry, light roast and mildly salty ending. As the beer warms, the oyster component becomes more pronounced – more a briny sea water type taste than a fishy one and the sour component becomes more subdued. It is very complex and layered and brings to the table flavors that you would not regularly find in beer, especially the combination of cooked oysters and sour.

This is definitely not a beer for everyone. Heck, it isn’t a beer most people would enjoy. I will be honest, I thought the beer was good, but I struggled to finish off the 22 oz. bottle. I wish that is was available in a smaller bottle size. If you are feeling adventurous, find a couple of likeminded friends and give Bottom of the Sea a shot. You might find you like it.

Epic’s Bottom of the Sea (Batch 1) attaches itself to a rock with a solid 3 Ostrea conchaphilia out of 5.