Every year I look forward to the early fall release of my favorite pumpkin beer – Elysian’s Dark O’ the Moon. I love the stout combined with the roasted pumpkin and just a hint of spice to balance and bring the beer to the next level. The best part of this beer is it is available both on tap and in bottles (about $7 for a 22 oz. one), so it is readily accessible. This review is for the beer I had on tap.

TASTING NOTES
Pours dark as night with creamy tan head. A little smokiness on the nose with malty bittersweet chocolate and a little coffee with subtle earthy pumpkin and spices for an overall nice and creamy mouth.

HOPS
Bittered with Magnum and finished with Saaz and crushed cinnamon

SPECIAL
Pumpkin in the mash, kettle and fermenter 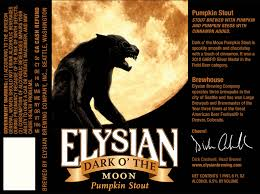 The beer pours jet black in color with copious amounts of roasted pumpkin, roasted malt and chocolate on the nose with background notes of allspice and cinnamon. Pumpkin dominates the palate early on before yielding to roast malt and grain with bits of pumpkin pie spice and finally finishing out with a rather intense and moderately long chocolate and cinnamon finish – intense dark chocolate and cocoa nibs (not at all sweet) and a strong burn of cinnamon, with just a hint of bitterness coupled with more pumpkin notes. The chocolate plays hide and seek on the tongue long after the sip, but is eventually overwhelmed by building cinnamon, especially as the beer warms, to the point where the cinnamon becomes the dominant flavor on the finish by the end of the pint. The 2013 version is definitely more cinnamon forward but the chocolate and pumpkin notes are still present and discernable, but the increase in the cinnamon intensity seems to throw the beer out of balance. Still delicious, but not as great as it has been in the past. I am wondering if the cinnamon needed a bit more time to mellow out and integrate into the rest of the beer.

Elysian Dark O’ the Moon draws blood with 3 Warren Zevons out of 5.

One thought on “Beer of the Week: Elysian Dark O’ the Moon”