8-Bit Arcade Bar first opened on November 22, 2013. We hit it on Friday night. There was a good crowd, though the photos below don’t show it. Here’s what you see when you open the front door: 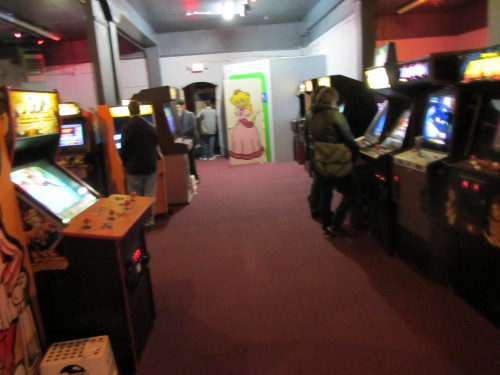 Defender and Zaxxon on the right. BurgerTime on the immediate left. That’s Princess Peach on the door of the ladies room. The next picture shows maybe 1/2 (or less) of the pinball machines: 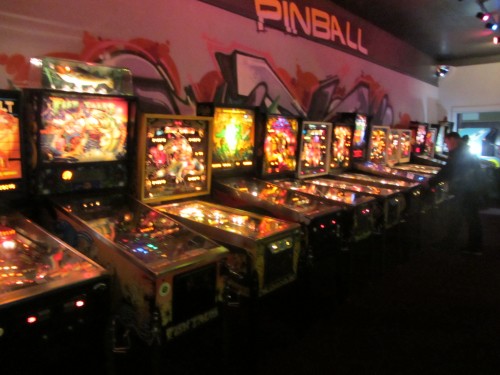 They had a few very old games I’d never seen before. Pictured is Sea Devil. It’s a pre-video game really (1969-1970). You look through the periscope and use eight torpedos to try to sink as much tonnage of ships as possible. Here’s a YouTube link to somebody playing it.

There’s a nice selection of cocktail games too, including Q-bert, Joust, and Asteroids. Six cocktail tables in total.

There are four beers on tap and some of the usual suspects available in cans. The tap beer was $5. They also offer small pizzas that are on the spendy side.

The games all cost a quarter. We played Moon Patrol, Tempest, Q-bert, Gauntlet Dark Legacy, Galaga, Galaxian, Xevious (which was super hard), Dig-Dug, and a few others. If you’ve seen it in an old-school arcade then it’s probably at 8-Bit. The proprieter said that they’re working to add popular games to the mix — the grand opening was delayed, and it cost them dibs on a few machines. Right now there are maybe 50 video games and 25 pinball machines. It’s a good collection as it is.

So:  They have beer, the difficulty levels on the games are reasonable overall, there’s a good selection, and the games are in good condition as a group. And, to repeat, everything is 25 cents!