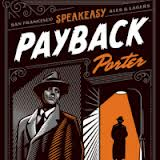 It sometimes boggles my mind that a brewery that widely distributes its beer does not have one of its regularly available beers listed on its website. Speakeasy is a brewery like that. For a place that distributes to some of the bigger beer markets in the country and has been around for 15 years, you would think that you would be able to find information on their beers via their website. You would be wrong. So other than being a porter and being 7.5% ABV, I can’t tell you much about the beer, so here is the review (consumed in a 22 oz. bottle):

Jet black with a tan head. Notes of coffee and caramel dominate the nose with lots of roasted malt to accompany it. Much sweeter than you would expect, with coffee, chocolate and caramel dominating the palate in the beginning before yielding to a long coffee/roasted malt finish. This beer reminds me of drinking a caramel macchiato with a hint of bitterness and feels like it is a coffee porter without any actual coffee in it (as far as I can tell). Plenty of depth and complexity, with no single flavor overpowering the others and balanced with the alcohol. On a side note, this beer pairs extremely well with Mt. Townsend Creamery Seastack Cheese.

Speakeasy Payback Porter is a great beer to drink on a cold winter’s day if you are looking for something big and bold to get you through your evening.

Speakeasy Payback Porter breaks in with 3 revenge killings out of 5.