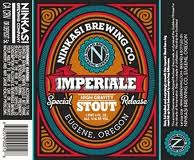 Ninkasi Brewing is located in lovely Eugene, Oregon and makes a wide range of beers, including a couple of pretty stellar IPA’s. The Imperiale Stout is a special release available in 22 oz. bottles and on tap; we consumed the beer in a bottle, and, as I didn’t purchase the bottle, I am not sure what the beer ran price wise. According to Ninkasi’s website, Imperiale is:

Strong, dark and brooding, Imperial Stouts were originally crafted by the British to survive the long journey to Russia through rain, sleet, and snow. Full bodied and surprisingly smooth, Imperiale Stout has a big roast hit up front, and rich, dark malt flavors balanced by ample hop bitterness.

This is a big beer, perfectly suited for a cold winter’s day. The beer pours jet black with a brown head. As you would expect, there are tons of roasted malt and chocolate on the nose. The initial taste yielded a beer that was more subtle than the nose suggested – very dry with hints of chocolate and roasted malt on the front of the palate, fading quickly into a smooth, milk chocolate like finish, that unfortunately disappeared more quickly than I would have liked. The beer stayed pretty consistent as it warmed, with some notes of toffee starting to show up at around 50 degrees. The beer lacked any real alcohol burn for being over 9% and lacked any real hop personality despite its 70 IBU. I actually had no idea the IBU was that high until I looked up the stats for this review; they are just about completely lost in roasted chocolate depths of this beer.

Imperiale generates a rating of 3 Sumerians out of 5.