If you want to consider Alaska as part of the Northwest, then Midnight Sun Brewing in Anchorage is definitely a brewery that should be considered one of the best in the Northwest. If you are like me and think that a brewery 1800 miles from Seattle is not really part of the Northwest, then you can call Midnight Sun possibly the best brewery in Alaska, a state that has a surprising amount of great breweries. My only knock on Midnight Sun is that their beer is spendy. Take the recently consumed XXX Black Double IPA, which ran about $12 for a 22 oz. bottle. Of course I had to try this beer since I don’t think I ever had a double black IPA, so price be damned, I bought it. The beer clocked in at 8.5% ABV and 87 IBU.

The beer pours jet black with a creamy brown head. Significant roasted notes with hints of citrus and coffee in the background and a touch of boozy vanilla show on the nose. The beer starts out on the palate with a slight sweetness from the malt before quickly moving into a strong hop character with distinct notes of mango and passion fruit up front, then moving to dried citrus with just a hint of citrus peel. The finish is slightly boozy with strong notes of roasted coffee and hints of vanilla with touches of orange blossom and peel interspersed in a very long finish. Despite the boozy quality, the alcohol is balanced and there is no alcohol burn and the flavors are deep and layered, bringing this CDA to the next level. I would definitely drink this one again as a rare treat to be enjoyed in the fall and winter months in the Northwest.

I really intended to post this on December 31st, but I forgot to switch the date on the post, so it is a couple of days late.

Overall 2013 was a banner year for beer in Seattle, particularly Ballard with a significant number of new breweries opening and the existing breweries kicking it up a notch with the quality of their beers. It was a particularly banner year for beer reviews on this site also, with me posting just north of 100 beer reviews on the site (that is a ton of beer and that doesn’t even take into account the beer notes I have but have not posted yet). This has made determining my best beer of 2013 much more difficult than last year. Here are the rules for determining the winner:

This really was a challenge – I had about 15 beers that I scored 5 points so I took down my list from there to 4 contenders for the best. It was actually going to be 5, then I realized that the one that would have been in the 5th spot has not yet had a review posted, so, it is an early contender for 2014 (and no, I won’t tell you what it is). The final 4 came down to hoppy vs. roasted, so let me show you how this played out:

A good old Ballard brewery smack down and a competition between 2 breweries I love and what I think are the 2 best beers these breweries make. This was a hard choice. Full Spectrum is one of the best Imperials out on the market and I think it holds its own against beers like Pliny (yes, it is that good). The problem is, I think this about the Imperial Rye IPA (the cask version particularly):

I tasted this side by side with the regular version of the Imperial Rye, a beer I dearly love, and honestly, the cask version blew the doors off the regular version. After tasting the cask version, the regular, a fantastic beer in its own right, didn’t have the same level of intensity as its sibling. I am going to go on the record here as saying the cask version of the Imperial Rye IPA is one of the 10 best beers I have ever had and quite possibly in the top 5. Yes, it was that good. Next time it makes an appearance, you should be waiting in line for this beer when it gets tapped.

As good as Full Spectrum was, the Imperial Rye edges it out just slightly and moves onto the finals in a close match between 2 heavyweights.

This could also have been called battle barrel as both beers spent some time in oak.

Again, a tough choice. Both were massive beers and both were spectacular. Both of these beers had tremendous balance and flavor, and it really came down to a number of small differences. I can sum it up about the winner in a post I made about the beer in its initial review:

If you like Russian Imperial Stouts, you need to try this beer. Really, it is that good, and possibly the best I have ever had.

That beer was the Midnight Sun Moscow, edging Reuben’s (and preventing an all-Reuben’s Final) by the tip of a Cossak’s bayonet.

That sets up the final between Anchorage and Seattle, with 2 heavy hitter ready to slug it out in the ring. They went 15 rounds, toe to toe, bringing us in with a split decision. I will turn it over to our ring announcer for the results:

The winner, by split decision, and 2013 Cheapseateats.com Beer of the Year…Reuben’s Imperial Rye IPA!

A Reuben’s beer takes the title for the second straight year! Another well earned (and hard fought) victory for Reuben’s and congratulations to Adam and Mike for making such fantastic beer. Can Reuben’s do it again in 2014? Only time will tell. I can say that they have some pretty stiff competition to go up against if they want to 3-peat.

Since I reviewed Reuben’ Imperial Russian Stout, I figured that I should continue the trend with the Midnight Sun Moscow Imperial Russian stout brewed with rye. This is one that was not exactly easy to come by and was only available in 5 states – AK, OR, WA, CA and, for some reason, NY. Not only that, it was spendy, coming in at $13.50 for a 22 oz. bottle. I, of course, had to buy 2 of them. From the Midnight Sun website:

First brewed as part of our 2011 World Tour series, MOSCOW Rye Russian Imperial Stout is a hefty, opaque black liquid that pours slowly and soulfully into your snifter. A high percentage of spicy rye and roasted dark malts create a dense, chewy yet elegant winter wonderland of flavors. And from AK we say: Let it Snow…in Moscow. 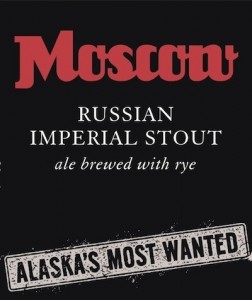 The beer pours a beautifully jet black with a coffee brown head. Strong notes of coffee and chocolate dominate the nose with hints of rye interspersed and a very light fruitiness also shows itself, but it could easily be missed among all of the bigger scents. Thick and inky with a tremendous buildup The beer starts off with a very light milk and sugar profile before transitioning into roasted malt and chocolate, next moving into the realm of black coffee before finally ending with notes of rye and sugar in a very long fade with hints of chocolate lingering on the palate. This beer is complex and well balanced and the strong flavors hide the 11% ABV well. To add to the complexity, as the beer warms, the finish is joined with notes of fruit and rye, adding yet another layer to this beer.

It is a rare occasion that I will spend nearly $14 on a beer and even rarer that I would recommend to anyone to do the same, but this is one of those times that I am making a recommendation. If you see this beer, buy it. My second bottle is destined for my beer cellar and I really wish I had picked up more than the 2 I did. Even Mrs. Iron Chef, who really doesn’t like dark beer, wasn’t completely horrified at tasting this beer. If you like Russian Imperial Stouts, you need to try this beer. Really, it is that good, and possibly the best I have ever had.

Midnight Sun Moscow Russian Imperial Stout with rye sweeps your thoughts away with an amazing 5 Perestroika’s out of 5.