I think it’s fair to say that the results I’ve had when using “00” flour have been… uneven. Each time the dough has been stretchy to the point of barely manageable, at best.

I did a little looking around online — it sounds like “00” flour is supposed to be really stretchy, and it doesn’t absorb much water… I’ve been using too much water in the dough. Evidently “Official” VPN pizzas use either 58% or 58.7% hydration. (The actual quantity quoted varies by source. I didn’t look that hard.) (That, and in Reinhart’s “American Pie” he says that in Italy, Bread Flour may be included at 25% of the total amount of flour. Sneaky.)

Also, oil isn’t used in a VPN pizza. However, while searching for the “proper” hydration I found sources that recommend 1-2% oil for home bakers using “00” flour, due to the temperature differences between a home oven and a professional or wood-fire oven. So…

This time I kept it as simple as possible:  240 grams “00” flour, 57% hydration, 1/2 tsp salt, 1/2 tsp instant yeast. Knead on low speed for 10 minutes. I gave it a stretch and fold after an hour, then let it rise for another 45 minutes before shaping. A baking stone was preheated to 500F in the oven, the dough was formed on a pizza peel, and: 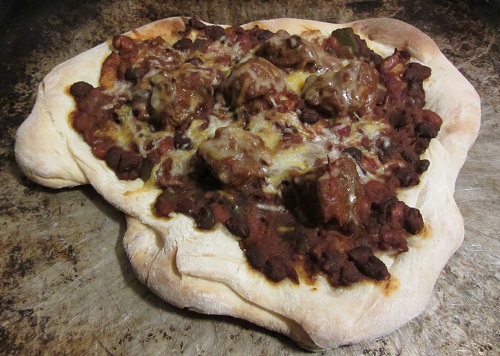 The chili carmelized and sweetened somewhat in the oven, but it was still tasty and not too dry. The crust had a nice snap that in places was almost reminiscent of tortilla chips. I thought it worked. I know my mouth was watering before I dug in.

(The rest of the recipe:  10 minutes in the oven with the non-meat component of the leftover chili, then the reserved meat pieces and a “Mexican” cheese blend were added and allowed to heat through for three minutes.)

1.  57% hydration seems to be a good starting point for getting the hang of “00” flour. It behaved in a fairly similar fashion to a higher hydration bread flour.

2.  My shaping needs work. The dough was too thick in the center, and the seams from the stretch and fold are clearly visible in the finished product.

3.  I may try adding 1% oil next time, or brushing the rim of the pizza with oil, or both. A little more color would have been nice.

4.  240 grams is plenty for a small diameter pizza. 200 grams might be more appropriate next time.

Overall all it was a good learning experience, and I used up leftover chili in the process. I enjoyed eating it, so win-win-win.

It might be just me, but I think maybe chili is a less “weird” topping on pizza than some other things are.. Like pineapple.